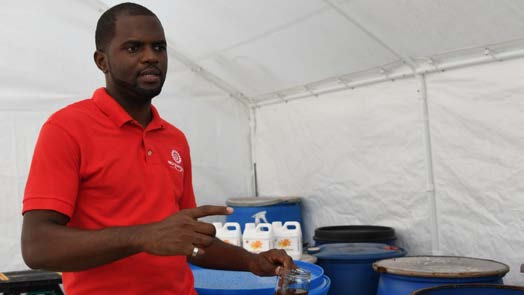 What started out as a simple search on how to grow nutritious food for his pet iguana, soon resulted in Joshua Forte starting a biotechnology firm – Red Diamond Compost – albeit on a bootstrap budget and strong support from his family. “I was trying to figure out how I could grow food for my iguana – which is mostly green leafy vegetables – rather than buying it from the supermarket because it was expensive,” recalled Forte.

“It was in doing that – looking at growing the foods – that I came across a guy that was talking about nutrient dense foods. That was something completely new to me.

He was talking about his own health issues and how he changed his lifestyle and started focusing on more plant-based food “So I decided then I was going to look at this a little closer and see if there were merits to it, and I started to make some adjustments to my own diet. After a week I had an experience where I had this huge burst of energy and my mind was clearer,” he said. It was between 2016/2017 that Red Diamond Compost was born. mBefore all of this, however, the former Alexandra School student had very little interest in the area of Agriculture and instead, had his sights set on pursuing a career in the field of mechanical engineering and aeronautics.

The idea for Red Diamond Compost was conceptualised in 2014, following a sequence of events, including Forte getting very ill and having to withdraw from the University of the West Indies, Cave Hill Campus where he was majoring in Physics around 2011/2012.

In 2011, Forte did a job attachment with the Planning Unit of the Ministry of Agriculture for a few months, where his interest in husbandry was piqued after getting a general picture of “what agriculture was like in Barbados”.

All the while, an observant Forte, who always has an eye for business opportunities, said he saw a need for more environmentally friendly solutions to build healthier soils for the production of more nutrient rich food in Barbados.

“Even today, while you have people who claim to provide those solutions, when you look at the outcome and the effects of the product they are not giving the desired outcome and that is why I decided I am going to start Red Diamond and we would develop these products focused on building healthy soil, building the beneficial organisms in the soil, and that is where it really began,” he reminisced.

Red Diamond Compost is involved in continuous research and development in the area of organic agrochemicals with a focus on soil amendments and composts. The company currently offers a biofertiliser – Liquid Sunshine – which is made from an evasive plant species.

Red Diamond was also one of the first out the blocks to create a biostimulant from the menacing Sargassum seaweed, which Forte said gave “some pretty good results”. However, due to financial constraints and not having up-to-date equipment, he placed that aspect of the business on pause in 2018.

“Essentially, what I have been able to do with looking at these different products is design a process which I call the dymo-matrix bio conversion of how do we take plant and animal matter, ideally waste materials, and convert them into clean agro chemicals,” explained Forte.

“So the idea is that we are essentially looking at sources – whether it is from plants or animals. We did develop a fish fertiliser as well, but that is still in the drawing board stages,” he said.

Forte told Today’s BUSINESS it was a “slow and tough” process for him when he started his business, explaining that introducing new products to the local market required him to get over “that learning curve”.

“What I found now though, through the pandemic the customers and potential customers have kind of taken a leap because everybody was online trying to figure out how to grow their own food. So we had people calling us up directly asking about compost, asking about the fertilisers and other things. That time period has actually helped a lot in creating some demand for the products,” he said.

Red Diamond Compost was one of several start-up firms that took part in the Bloom Cleantech Incubation programme last year.

Hosted by the BIDC (Export Barbados), Bloom is a national sustainable energy and climate technology cluster, which coordinates and provides business advisory services for its members in project financing, market research, innovation management and production commercialisation.

Forte told Today’s BUSINESS this programme provided an environment for him to engage with “persons of like mind and with similar interest” and with individuals overseas, while giving him access to investors, which he said was all important for the development of his business.

The 27-year-old, who is still eyeing studies in mechanical engineering and aeronautics, said when he started Red Diamond Compost he had “this hugely naïve idea” that as soon as he started his business he would be “hugely successful” so he could finish his studies.

However, he said what he has experienced so far instead has been an “interesting journey”.

He currently sells directly to home gardeners and some small farmers. However, Forte said it was his intention to scale things up later this year. He is also hoping to ramp up production of his Liquid Sunshine later this year and start exporting to select markets.

The most challenging for Forte so far has been trying to access investment or risk capital to grow his operation. He accepted that while there was a lot to be done to be investor ready, his biotech firm would also require a lot of investment from the get-go for research and development.

“Trying to find that capital to get you to that strong validation stage has been the toughest challenge,” he said, while noting that he has benefited from entering several competitions. He said most of his joy comes from discovering new things and having breakthroughs that will help his business, as well as seeing a happy customer.

His advice to potential entrepreneurs is to be committed, work hard and “have a picture for what you are trying to do and achieve, then you got to figure out how you navigate towards that goal . . . You might think you are not skilled in a particular area or you do not have a degree in that field and that could deter you, but you got to make sure you are passionate about what you are doing,” he added. (MM)